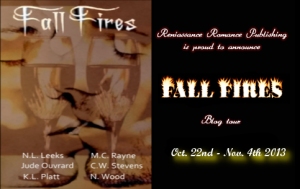 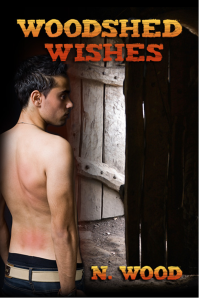 Ben, a young gay romance author, loses his way in the forest one stormy evening and is found by a ranger. When Ben pitches in to help his new friend Peter in the woodshed, he discovers that he may have met his match. Will Peter make Ben’s woodshed wishes come true?

“Come on, Petey,” I whined, teasing him with my personal rendition of his name. I only used it when I was desperate to get my own way. The slight narrowing of his eyes betrayed how little he thought of my chosen pet name for him, but I took the opportunity to argue my point with a pout. “It’s still summer. We won’t need a fire for months with this heat. There’s plenty of time to do the work.”

On any other day, my brown puppy eyes could make him crumble and agree to whatever I suggested, but on that day in particular, he appeared to somehow have the strength to refuse.

“You should take a leaf out of your own book — literally,” he jested back, adding a little more pressure to my breast bone to deter my attempt to edge nearer to him. “What was it that Blake said to Trent in Ballboys? ‘Don’t put off until tomorrow what you can do today’?”

I rolled my eyes when he quoted one of my many characters. Trust him to know my stories word for word, not that I could complain. Some scenes from my books gained their inspiration from things Peter and I had experienced together.

“Yes, but you forget that Blake was encouraging Trent to get down on his knees and suck his cock today instead of putting it off until tomorrow,” I corrected him. “So how about we re-enact that scene?”

My hinting words distracted him long enough that I was able to take the last step towards him. Reaching down, I snagged my fingers under the belt that was looped through the waistband of his jeans and started to unbuckle it. Though his eyes contained a slight glaze of lust from the thoughts I’d instilled in him, he snapped out of his distraction and caught a hold of my wrists, prying my hands away from him and holding them there.

“Tut tut, naughty boy,” he scolded with a teasing tone. “I have plans for tonight once all this work is done, but you want to jump the gun and get the party started early? You can’t disrupt my plans like that. You ought to be punished.” 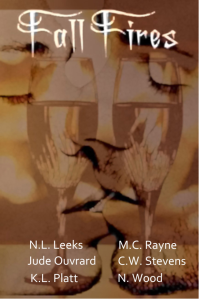 N. Wood is a budding young author living in Cornwall, United Kingdom. She developed an interest in writing when her poetry was first published at the age of nine. Since then, she has moved onto writing both short stories and novels focusing on gay romantic themes. 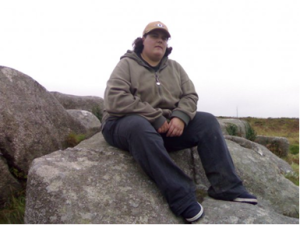